Yesterday, while at work, I realized that it was the night of the Friday Night Sew In, or FNSI for those of us who have participated. I was so super excited! I’ve missed the last few sew ins, and was ready to spend the night stitching away.

Since hubby now works late, I couldn’t get started until I put Little Moore to bed. I kept a close eye on the clock as we watched a movie, ate dinner, had a bath, read a story, and got tucked in. By 10:00, LM was tucked in and on his way to dreamland! YAY! Sometimes good plans DO work out… or so I thought…

I started pressing. First I pressed open the seams on my “JRR” quilt. This is a totally secret project I’ll have to tell you about some other time… but it is going to be fun! Then I moved on to pressing Fat Quarters for my next quilt project, due to be completed by the end of the month. I got through ironing all 18 FQs with Best Press (love that stuff), when hubs came home. I took a couple minutes with him to catch up on his day and week (with the schedule change, we really don’t see much more of each other than we did before). As I was getting ready to head back upstairs… I heard LM call out. Hoping it was just a dream, I waited… but it wasn’t.

He cried for momma… so I went up to snuggle with him. He was complaining about his right leg… the one he broke last November. He’s been growing noticeably this last week, so I’m thinking that growing pains + healed spiral fracture = extra painful. Poor guy. We snuggled until we were both asleep… so here is what I have to show for last night: 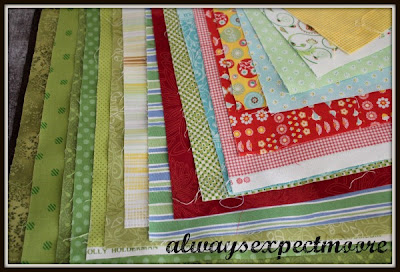 Okay… not the most impressive result… but I tried, I got a little further on two projects… and LM is still asleep now… so I’m hoping to sneak in some cutting after I post this lonely picture in the FNSI Flickr pool!

Have a beautiful weekend!