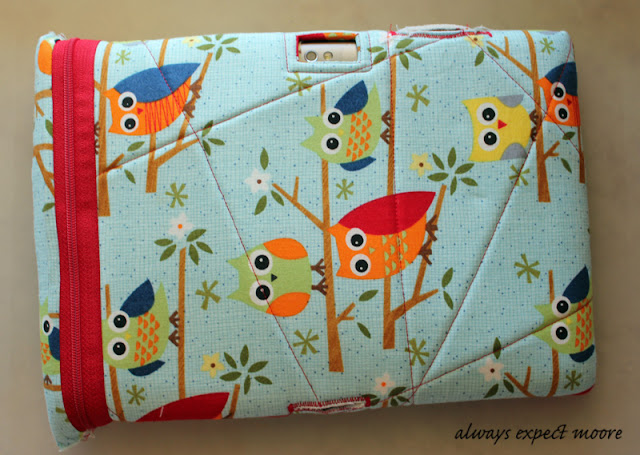 I almost called this post “Functional but not Pretty” because that is how I feel about it. I’d love to, one day, perfect this pattern and share it. But, that will have to wait. For now, I have something functional… even if it is not pretty.

Last weekend, we took a plane trip to see my inlaws. Just a short one-hour flight, but between taxiing to and from terminals, and waiting to get on the plane, I knew we’d need some preschooler distractions. Which meant downloading Angry Birds onto the tablet. And *cringe* showing the game to my nearly-4-year-old. Who now asks to play every time he sees the tablet come out.

Before handing over one of my favorite pieces of technology to someone too young to pronounce Bacon properly, it needed some padding. I have a pretty padded case for it, but I made it from an iPad case pattern, so my Samsung Galaxy tablet doesn’t fit right, and can slip out if you’re not careful. “Not careful” is in the definition of being a toddler, so a new case was in order.

I started by sketching out the measurements. You may have seen this image on Instagram (if not… follow me! I’m @craftmoore). 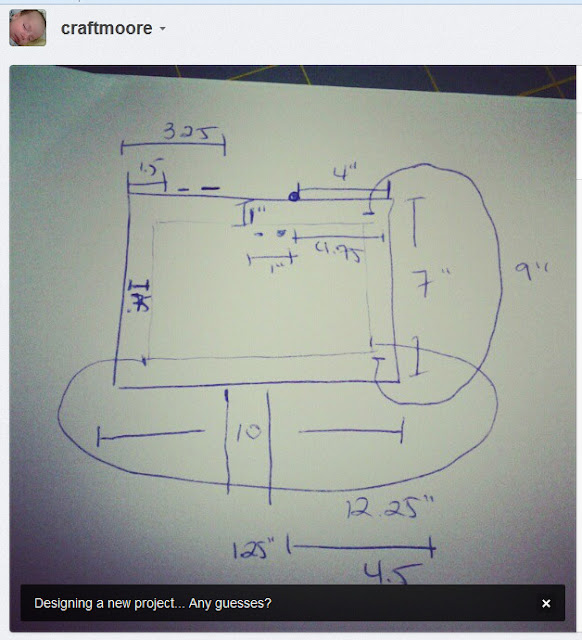 Then I cut fabric and some Soft and Stable. This is a spongy material great for protecting technology, you can quilt and stitch right through it like batting.

I’m not going to show you my first attempt. It ended up being too small. The image at the top of this post is the back of my second attempt. Not bad. The zipper is placed well, the hole for the camera looks finished, though maybe a little crooked. The buttonholes to access the power and volume switches and to plug in the power cord, aren’t as finished looking as I would like, but it is functional.

It is the front that really needs work. From past experience, I knew that on a tight-fitting cover with a hole like this, the hole would stretch out on the sides. So, I stitched elastic into the seams to combat the inevitable stretch. This worked passably. There is still some curving, but not too bad. However, when I made the cover I discovered that the front was a little too big, Rather than making a third version, which I wasn’t up to only hours before a plane trip I hadn’t finished packing for, I decided to stitch them in, leaving puckers. And the finishing of the zipper… well… let’s just say it leaves a lot to be desired. 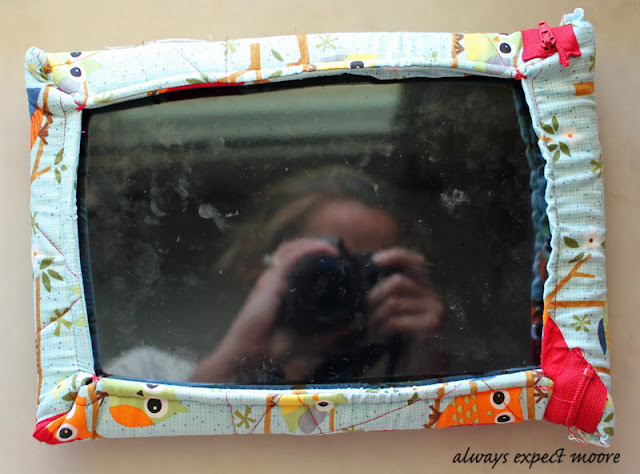 By the kiddo smudge-prints on the screen (which we’ll pretend I intentionally left on the screen for effect), you can tell that the tablet gets a lot of use… and thanks to a functional cover, I don’t have to cringe in fear when I see the kiddo carrying it around.

Maybe, someday, I’ll re-work this pattern to make a functional AND beautiful tablet cover. I think as long as this cover stays on, my tablet should survive to see that day…