For Little Moore’s first birthday, three and a half years ago, I made a small car cake for him to smash into. He doesn’t remember, but he has seen pictures. Quite a few times he has requested that I make him a car cake again. I’m sure I will… but before then I had Baby B’s first birthday cake to make. For Baby B, we were throwing a Dinosaur Birthday Party. I had all kinds of fun ideas planned (I’ll share more with you soon – I promise!), but the cake really had me stumped. Dinosaur cake. How was I going to make this happen? 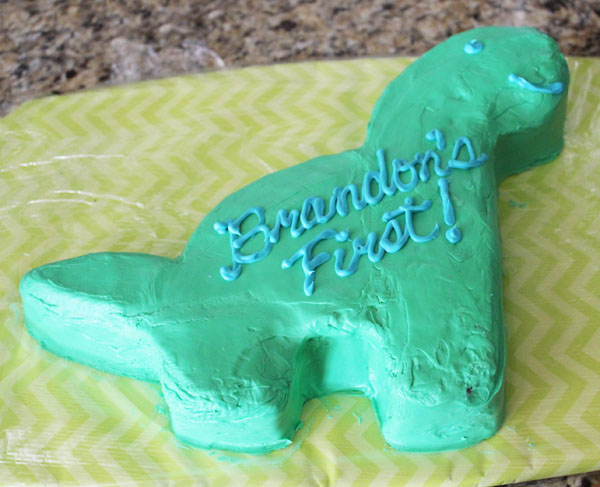 Sure, I could make a traditional cake and slap some dinosaur toys on it. But I really went all-out for his brother’s birthday… and being a second child myself (and my mother was a second child too), I’m very conscious of second-child syndrome. Yes, some things are going to be different for Baby B than for his big brother… but I’d like to have some things the same, too. So I got baking.

I used one boxed cake mix to make 2 round cakes in 6″ cake pans. I’ve had these cake pans forever, and love them. I used them for Little Moore’s first birthday as well. I got them my last semester in college when I lived in a tiny apartment with no oven. When we were first dating, I used them to bake a birthday cake for my husband in a toaster oven!

From the second cake I cut an arch to make the head, and a pointy bit for the tail, and then put them by the body piece like so: 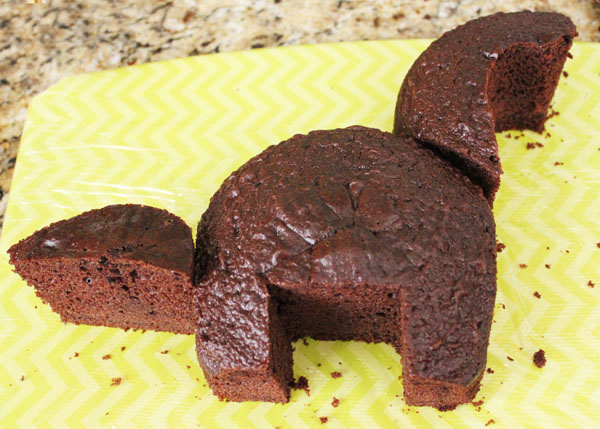 Yup! Already starting to look like a dinosaur! I then cut the top so the cake was level. Now he looks like this: 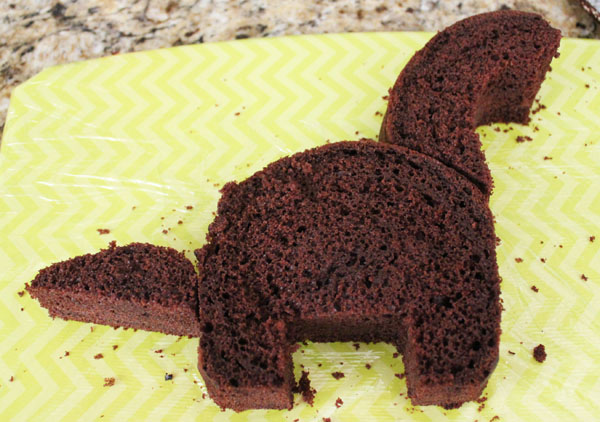 I used canned frosting, and gave him a thin layer of frosting. This is called a “crumb coat”. I didn’t worry about crumbs everywhere, because this is getting covered up later. I just wanted to seal everything in. At this stage, he looks pretty ugly. 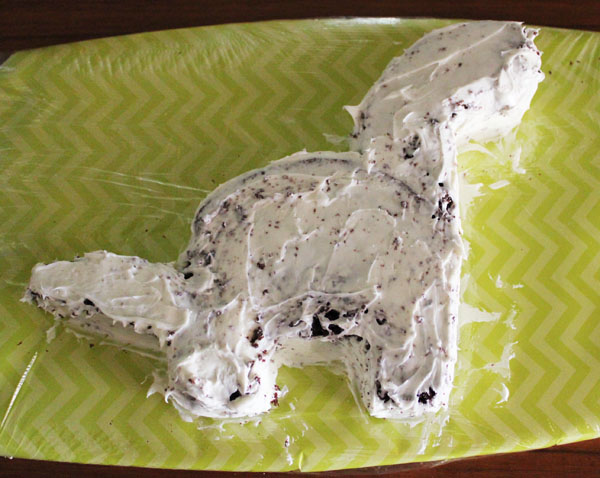 I tinted frosting green until I got it the right color, and then put it in a piping bag. I grabbed the largest tip I had, which happened to be a star tip. I then piped the green all over every inch of the cake.

With a knife, I smoothed out the frosting. 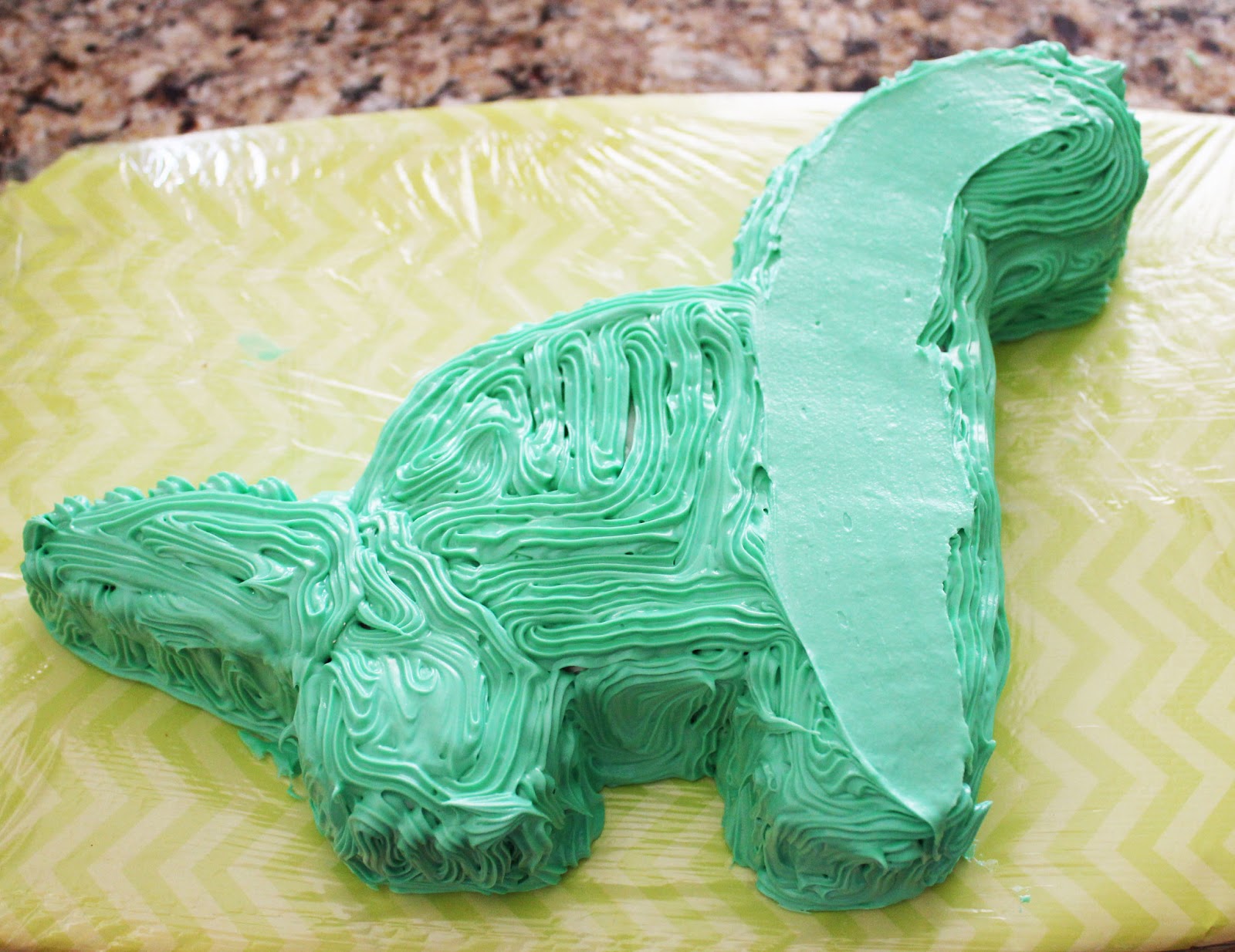 I added a couple touches later with a contrasting color, for fun… but that’s optional. This is really a simple cake to make – I promise! And, he had his shining moment in the sun… before he was reduced to this… 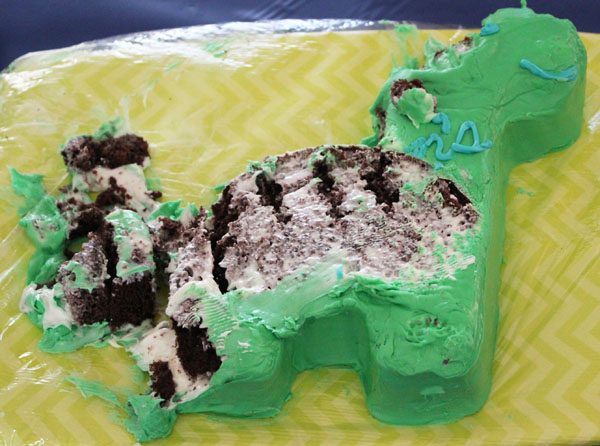 I hope that in four years, Baby B will look back at photos of this cake and ask for a repeat as well!