A gender-neutral baby shower done entirely in Winnie the Pooh was the perfect thing for my Sister in Law who hadn’t announced the gender of her baby, and who was decorating the nursery in classic Winnie the Pooh. Though I’m crafty, I knew that creating a shower around the Pooh Bear character, or even Pooh and his friends Rabbit, Tigger, Piglet, Owl, Kanga and Roo would be a lot of work… so I decided to simplify the overall theme and stick to “Bees and Hunny” with some Pooh Bear thrown in.

I started with the invitations. Plain white invitations, with honey colored cardstock. I rimmed the cardstock with a gold pen to give it depth. I wrapped a yellow ribbon around the base, and added a block letter from a set of Pooh Letters. On the top I added a honey bee, also from a Winnie the Pooh scrapbooking set. The bee held in place a piece of vellum on which I’d printed “We would ‘bee’ Delighted…”
The inside of the invitation continued the message with “… if you would join us for a baby shower.” 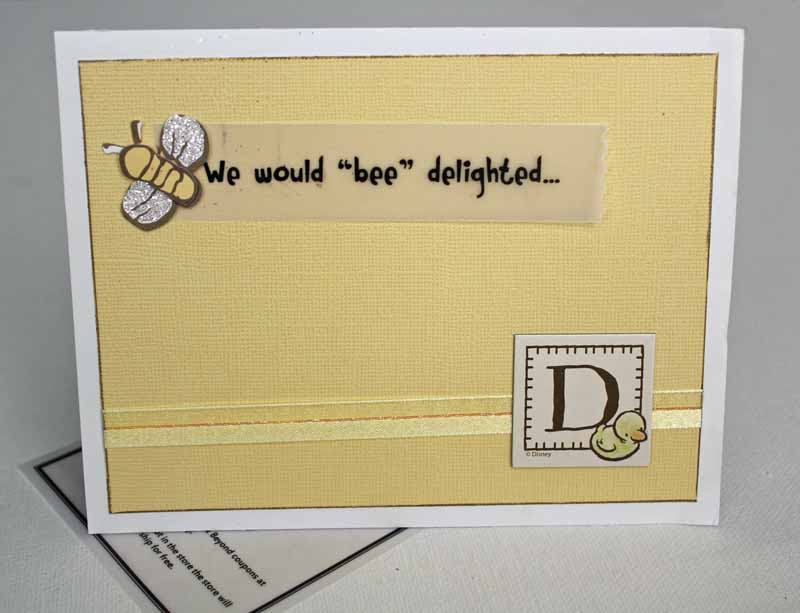 I love vellum for baby showers. You can see beneath the invitation, a small vellum card poking out. On this card I printed the registry information. Although most stores provide registry cards, I thought adding them to a vellum insert looked a little nicer, and I was able to add personal notes with more detailed registry information.

The favors were butterscotch candies, in small boxes. The boxes were cut with my Cricut. I added the cuts in the back to tie down the flap, and glued on the vellum before folding the boxes. I chose a “tigger orange” color for the boxes, and added the same honeybee from the invitations. 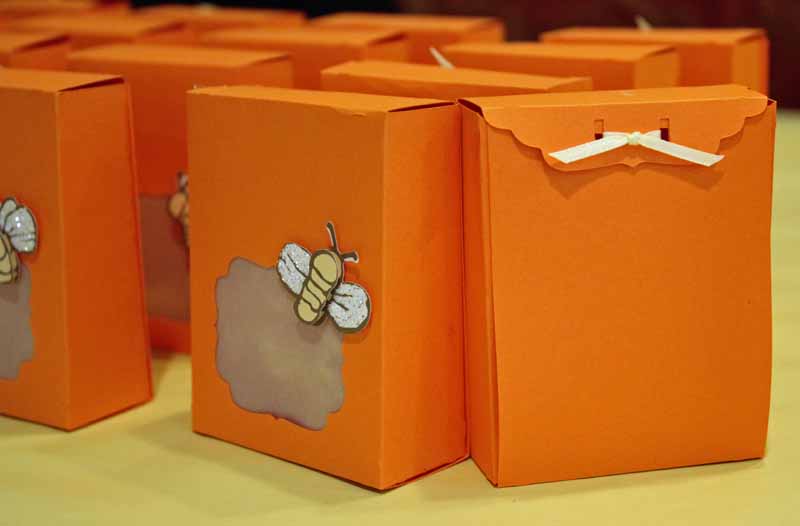 The prizes for the games were put in flower pots. I glued the bag into the base of the flower pot with hot glue, and then filled it with lemon drop candies. A bow with a bee button finished off the easy prizes. 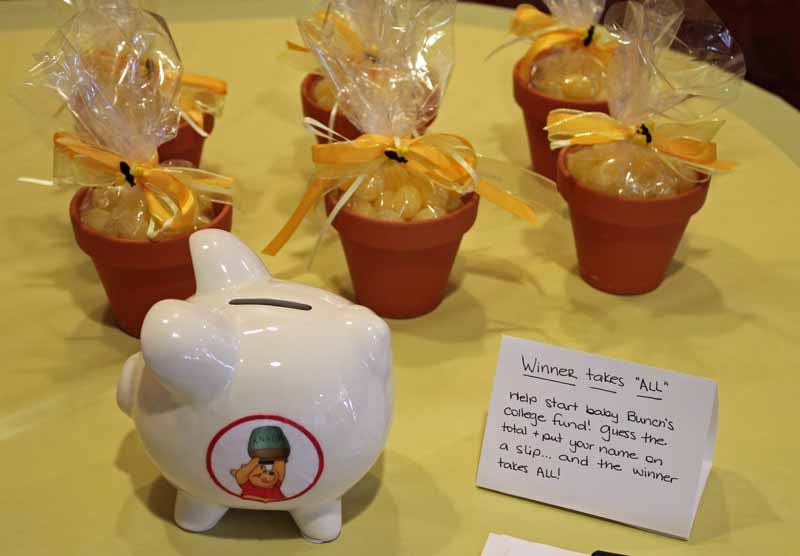 Upon entering, guests were invited to put a couple bills or loose change into the piggy bank which I had Mod Podged with a Winnie the Pooh. They could then guess how much was in the bank, and the winner would take “ALL”. This is a fun game, because guests are told that the money will start the baby’s college fund… but how can that be the case if the winner takes “all”? I assure them that all is well, and they’ll just have to see. After tabulating the totals, the winner gets a small bottle of “All” Laundry detergent!

After everyone was seated, guests were asked to put their address information on envelopes, as if the envelopes were being sent to them at their homes. These were collected and given to mom-to-be along with thank-you notes that I’d made to match the invitations.

Because the baby’s name had not been announced yet, we played a baby naming game, where shower-goers were to create as many names as possible using the letters in the first and middle names of the mother and father in 5 minutes. 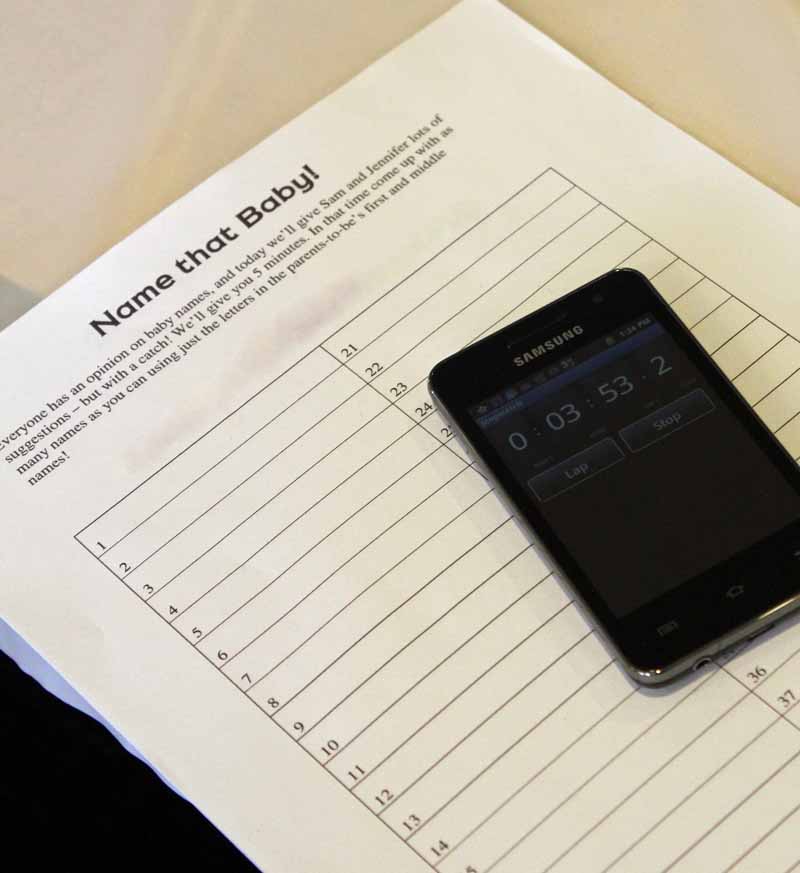 The final game was my standby of “Baby Shower Bingo.” Guests are given blank bingo cards. In the squares they fill in possible shower gifts – bib, towel, pacifier, bottle, onesie, hat, shoes, socks, sheets… the list is as endless as the needs of an infant. Once they have created their bingo card, the opening of the gifts begins. They check off items on their bingo card as gifts are opened. I love doing this game last because it is a great way to give away the extra prizes. I always have extra prizes on hand in case of ties on games. All the remaining prizes are passed out during baby shower bingo.

The table decor was simple. I used white plastic table cloths, with yellow tulle down the middle. The tulle was dotted with chenille honeybees. I found white ceramic bowls at Cost Plus World Market, and added “HUNNY” to the sides with paint specifically created for glass/ceramics. These were filled with a honey Chex Mix and Honeycomb cereal. 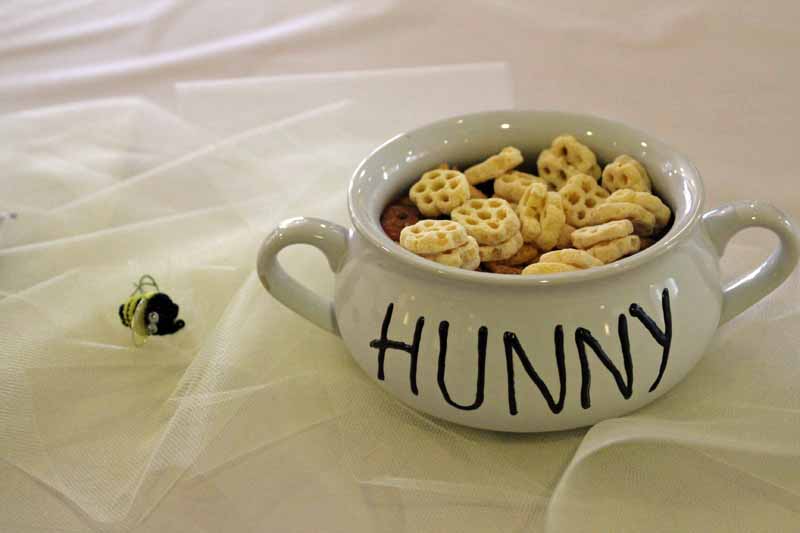 I found these Winnie the Pooh paper sculptures that we printed, cut out, and glued together. These were cute, but there is a lot of cutting involved! 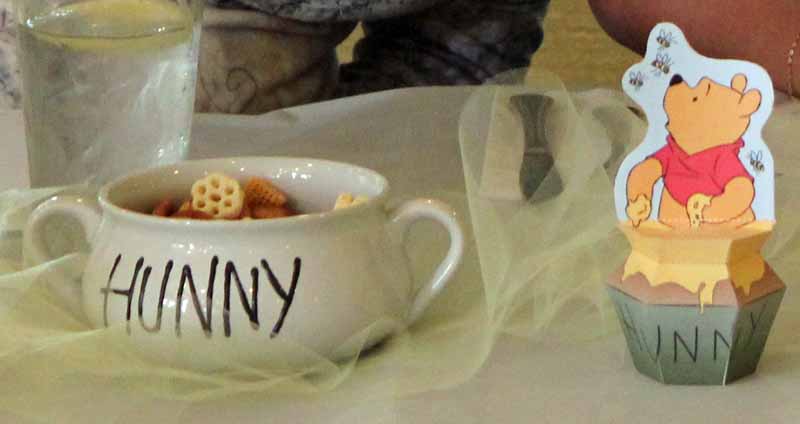 I wasn’t the only one taking pictures – one of the Aunties took pictures as well, and was able to grab a few of me as we were setting everything up. 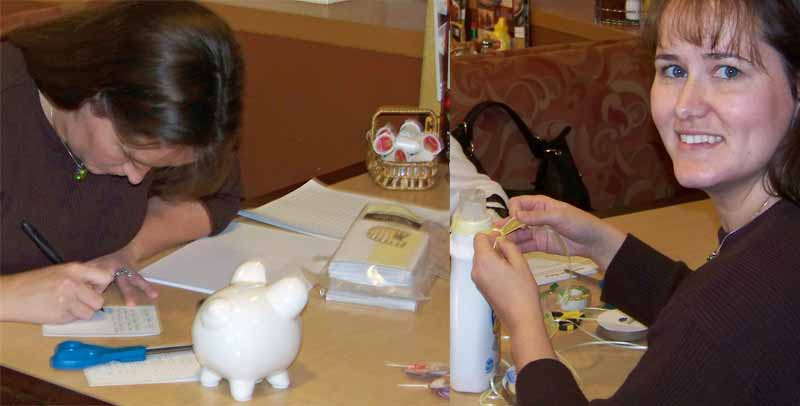