Jordan over at Kitchen Karate is an amazingly talented baker. Seriously, if he were my neighbor, instead of going over to borrow a cup of sugar, I’d stop by to snag a plate full of whatever he’s baking. Kinda makes the giant zucchinis I gave my neighbors a couple weeks ago seem like a ripoff, huh?


Each one of Jordan’s posts is like the perfect little plate… it has lots of yummy goodness, some sweet bits about him, and photos that are serious eye-candy. Mmmm… I’m getting hungry already! I guess it is time to hand over the post… take it away Jordan! 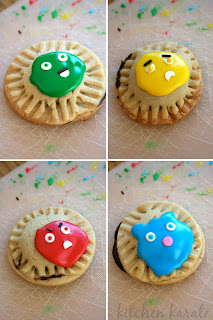 Remember when you were a kid and you used to name everything? It didn’t matter if it was a stuffed animal or your favorite pool toy, you just didn’t feel right if that inanimate object when unnamed. Please, don’t lie. You know you did it. If you really didn’t I won’t judge you, as long as you don’t judge me for naming everything.

As a kid I had a really, really big imagination. I use to play pretend in my friend’s backyard for hours on end. Or, I’d walk down the hall and pretend bad guys were coming at me and that I could destroy them with the fireballs I was “able to shoot out of my hands.” I may or may not confirm that I still do this on occasion. It makes me feel safe when I’m home alone. Only I don’t think imaginary fireballs would scare off a home invader with a gun. Though, maybe the crazy guy throwing his hands into the air making his own sound effects would. Maybe there’s a market for something like that?

And so as a kid I had a lot of stuffed animals and toys that I liked naming. I have a tiny brown bear holding a stuffed phone that I ingeniously named “Telephone.” I got a stuffed panda bear from my parents when I had my tonsils out that I promptly named “Tonsils.” I had a cabbage patch kid from my cousin that I boldly named “Sean” after my cousin. As you can obviously see, my naming skills aren’t the greatest and don’t be surprised if I have a baby and name it “Baby” or after the doctor who delivered it.

Yesterday I was able to spend a wonderful day with three kids who are rambunctious and active and great… They really are. One of those kids was my nephew J. My mom had generously bought them all blow up pool toys, much to my chagrin because I didn’t get one. Whatever, I’m over it. So, as I was swimming in the pool I turned to my four year old nephew who had received a three foot Killer Whale and said:

Me: Is your whale’s name Willy?

(After Free Willy? Get it? I thought it was funny, but I don’t think he got it.)

I guess my fantastic name giving skills are genetic.

Friday I made some Chocolate Dream Cookies that I have posted about once on my blog. They’re basically two sugar cookies with a tablespoon of a chocolate filling in the middle. The chocolate filling is made by scalding heavy cream and adding semi-sweet chocolate chips. This was, however, my first attempt at decorating cookies. I hate to toot my own horn, but I love them. 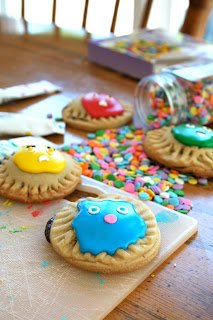 Directions:
1. In a medium bowl, cream the butter using an electric mixer at medium speed. Add the powdered sugar and brown sugar and beat until smooth. Add yolks and vanilla and mix at medium speed until light and fluffy. Scrape the bowl and then add the flour and blend at low speed until everything is thoroughly combined.
2. Gather dough into a ball and flatten into a disk. Wrap the dough tightly in plastic wrap or place in a plastic bag. Refrigerate for 1 hour.
3. Prepare the filling: Scald the cream in a small saucepan over medium heat. Add the chocolate chips and sit until melted. Remove from the heat.
4. Preheat oven to 325’F.
5. Using a floured rolling pin, roll dough on a floured board to 1/4-inch thickness. Cut circles with a 2″ diameter cookie cutter and place on ungreased cookie sheets, 1 inch apart. Continue using the dough scraps, rerolling and cutting until all dough is used. Drop 1 teaspoon of chocolate filling in center of each circle and top with another circle. Completely seal the edges using the tines of a fork. Bake for 15-16 minutes, or until cookies are golden brown. Transfer the cookies to a cool, flat surface with a spatula.
6. You can also sprinkle them with granulated sugar. 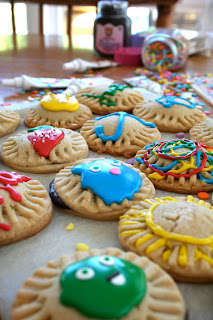 Jordan those look so yummy! Will you be my neighbor?

I’ll go ahead and admit it, I named all my dolls and stuffed animals… the only problem was that even as a child I was really bad with names, so most had to be re-named on a near-daily basis! Oh, and don’t worry about the naming-your-kid thing… after giving birth, no woman is going to let you call her “baby,” let alone name the baby, “Baby!” : )