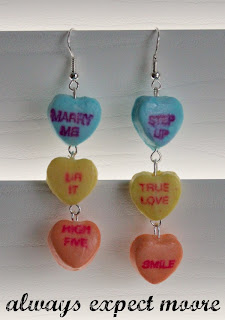 This is the perfect craft for anyone who DOESN’T have a sweetheart this Valentine’s Day. Just grab yourself a 50-cent box of Sweetheart candies, your favorite electric drill, and drill to the heart of the matter. In the process, you’re sure to break a heart or two… but you’ll have some sweet desserts when the project is complete!

Though the process for making these earrings is pretty straight-forward, the technique is not. Drilling a hole through the center of a hardened-sugar candy is not for the easily frustrated. I broke more candies than I successfully drilled. It took 2 boxes of candies for me to get enough color duplicates to make a set. It was an exercise in patience… but I think worth the time.

The first step was to drill the candies. I put my electric drill on the table, so it would stand on its own. I put a candy between the thumb and forefinger of my left hand, held it firm and steady against the drill bit, and used my right hand to operate the drill. This might have been a little dangerous. Use any and all safety precautions when operating tools. 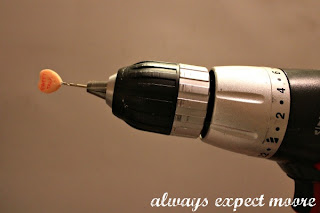 There were quite a few candies that were sacrificed in the making of these earrings. Some broke immediately, some chipped, and some snapped at the very end. To minimize breakage, start on one side, drill halfway, then stop. Reverse the drill direction, and remove carefully. Turn the candy over, and repeat for the other side. You’ll know you’ve broken through to the hole on the other side, because you will feel less resistance. Again, reverse the drill direction, and back the drill out. 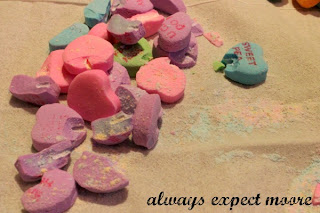 After you’ve put holes through enough candies, it is time for the slightly-less-frustrating part. Adding the Mod Podge Hard Coat. This will add a seal to the candies, making them more resilient. Even so, I wouldn’t put these earrings on with wet hair… just in case. 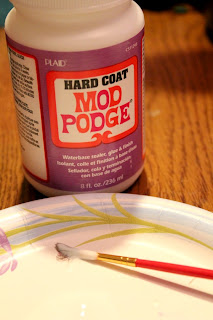 When applying the Mod Podge to the top of the candies, add a quick, thin coat in one pass. If you go back over the wet Mod Podge, the ink on the candy will smear. Also, if the Mod Podge is too thick, it can cause the ink to smear or run. And runny ink is not cute.
I put on two coats, on the front, back, and sides. After each coat, I blew into the holes to keep them clear of any Mod Podge buildup, and let the candy dry before adding the second coat. 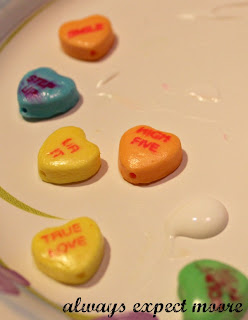 Once the candies had their second coat, and were mostly dry, it was time to add the hardware. I’m not a jewelry-making expert, but here are the parts I used. 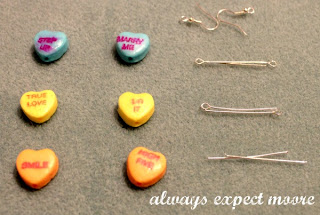 I started with the bottom candy, threading the headpin through from the bottom. Using round-nosed pliers, I curved the top down. You want to be really careful here, because too much pressure could cause your candy to crack… which would be really frustrating this far into the project. 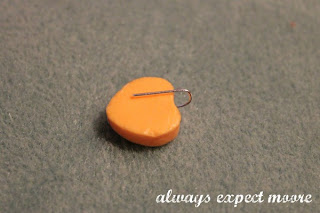 I clipped down the length of the headpin, added an eyepin, and then curled the headpin the rest of the way with the round-nosed pliers. I did the same with the next candy, and then the last candy, adding the earring wire at the top. 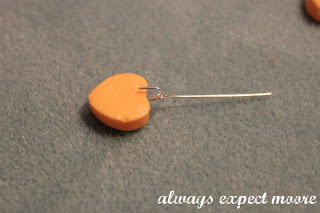 And here they are all finished and ready to wear! 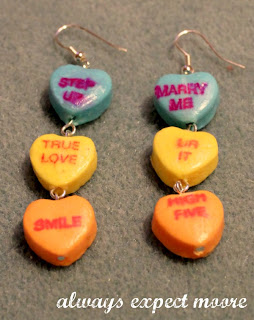