I live with a picky eater. My 4-year-old has a very short list of what he’ll eat. We’ve been successful at increasing this list, but it is a slow process. I don’t like to make him a different meal than what the rest of the family is eating, so I try to cook one or two things that I know he’ll like, and add in something different. And, if I can add or skip one step in what I’m making for the rest of us, I’m okay with that, too. Like putting aside some pasta before I’ve added the marinara sauce. I keep this in mind when I plan meals, and shop for them. You can see how my shopping trip went in my Google+ album.
My husband and I have very different schedules. He’s only home for dinner with the family a couple nights a week, and I like to make those nights yummy. But my schedule is hectic, too, and I don’t need anything complex or time consuming. This Tyson Crispier Breaded Chicken Filet dinner was quick and easy to make. 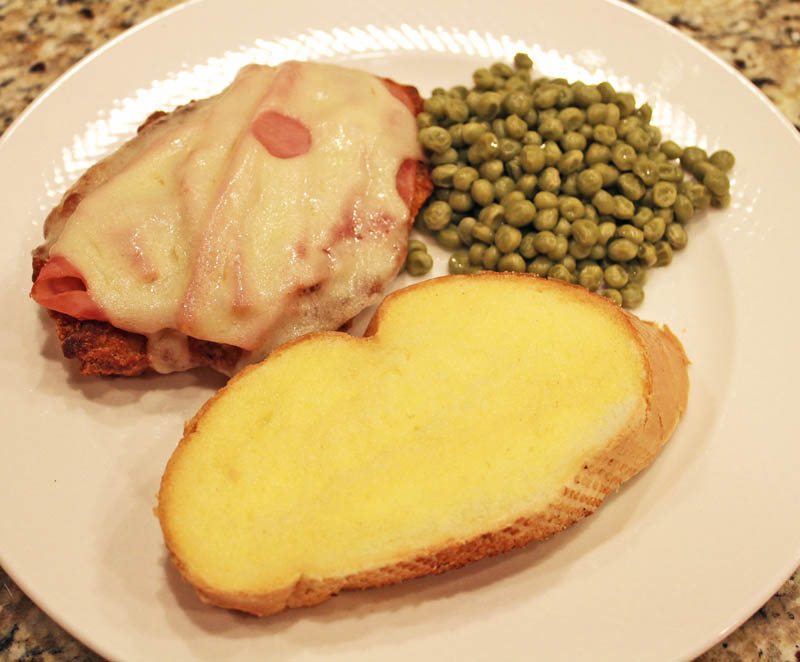 I started by pre-heating the oven, and cooking the Tyson Chicken Filet as instructed on the back of the bag. I pulled them out 5 minutes before they were done, and put a couple slices of ham and a slice of swiss cheese on top, then returned them to the oven for the remaining minutes. 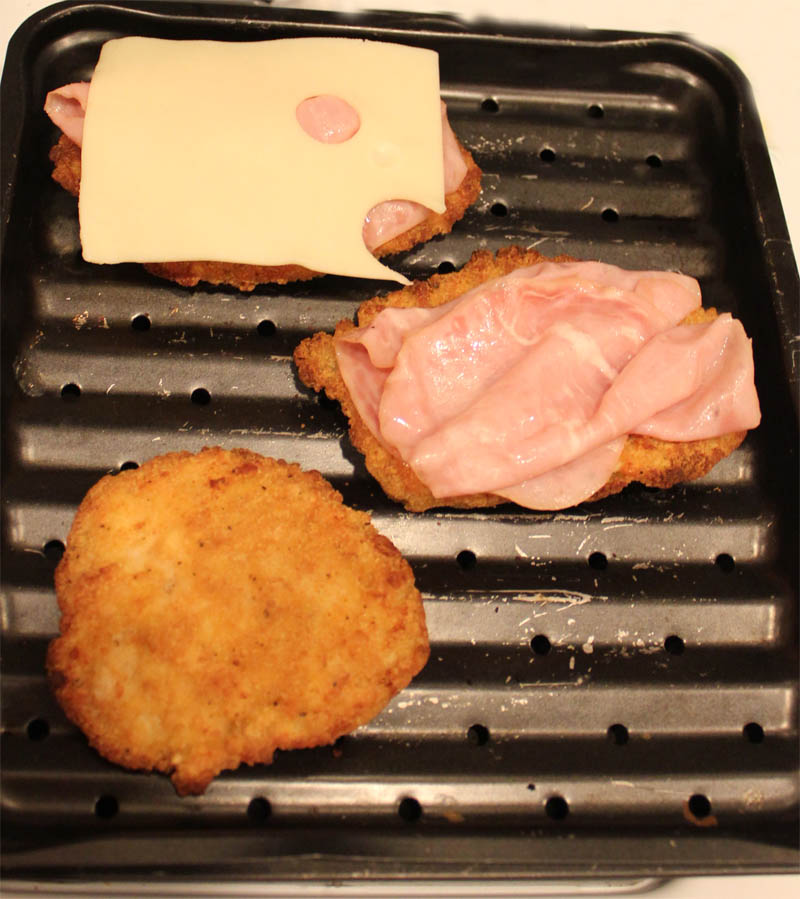 After my crispy Tyson Chicken cordon bleus were done, I let them cool while I put some garlic bread in the already warm oven. My garlic bread is just slices of store-bought french bread with a little butter and sprinkling of granulated garlic. My peas are just as easy. Canned or Frozen peas with a couple pads of butter and some honey, popped in the microwave until they are hot.
I left the ham and swiss off of my son’s crispy chicken, because he is such a picky eater. I served the Tyson Crispier FIlet to him with excitement saying, “Oh WOW! Look! This is a GIANT chicken nugget!” Chicken nuggets are his favorite food, and I’ve discovered that comparing a new food to a food that is a current favorite is the best way to get him to try it. The first time he ate steak it was because we cut it thin and called it “bacon”. And I got him to try (and fall in love with) whipped cream because I told him it was like the filling of an Oreo cookie. 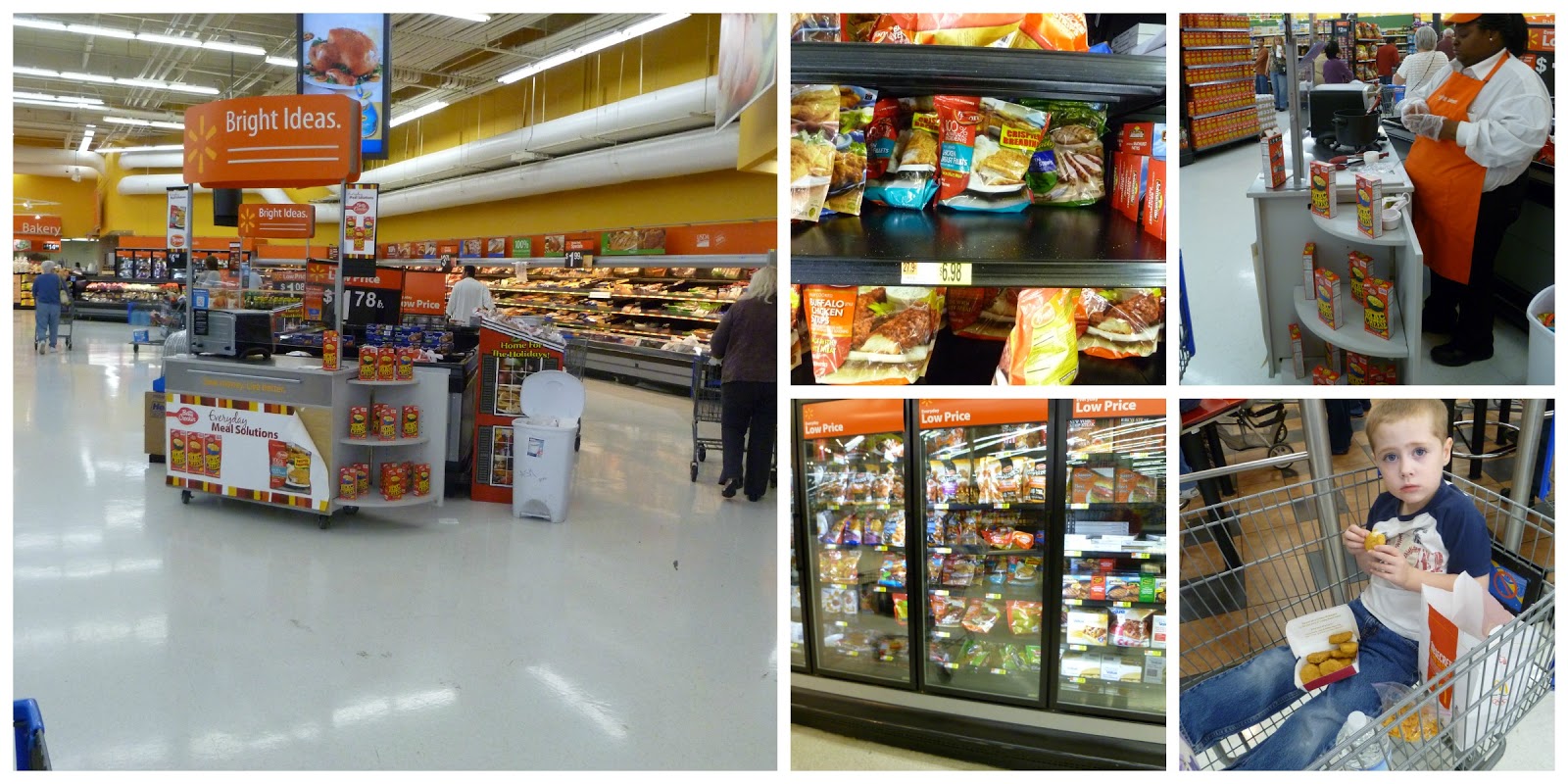 I love my #Mealstogether with my family… especially when everyone loves what is on their plate! My husband and I really liked our cordon bleus, and my son loved the novelty of his “giant chicken nugget” and ate it as well. The peas, however, were left on his plate. There are some battles that even the most creative mom can’t win!
If you’d like to learn more about Tyson Crispier Chicken, check out the Tyson website, or find Tyson Foods on Facebook.
I am a member of the Collective Bias®  Social Fabric® Community.  This shop has been compensated as part of a social shopper insights study for Collective Bias™ and Tyson #CBias #SocialFabric.