Recently, Heelys sent me some of their awesome shoes. I’m sure you’ve heard of them, or seen people wearing them. They’re the fun shoes with the wheels in the heels!

You may not know that you can wear them two ways – with the wheels popped in, or taken out. The shoes come with a special tool that makes popping the wheels out super easy. And when you put the wheels in, you hear an audible “click” so that you know that the wheels are in securely.

When my husband and I were dating in college, there was a big group of friends who would go rollerblading together. The guys would jump down tall stairs while videotaping each other. Though I got pretty good on my rollerblades, I was never the leap-tall-stairs-in-a-single-bound kind of gal. But, it was great exercise, and a fun way to hang out. Strapping on these Heelys brought me back a decade to those fun nights out on the city streets, laughing and hanging out with my friends… even though this time I never let go of my kitchen counter! Because at 21, falling while rollerblading is no big deal… but falling a decade later, on my kitchen floor, in front of my husband and 3-year-old, while 4 months pregnant… probably something I want to avoid! But once spring comes, and this baby with it, I’m going to become a Heelys Proficient!

Even though scooting around in wheeled shoes isn’t in my immediate future, I can still wear the coolest shoes on the planet – without the wheels. And because I’m removing the fun of the wheels, I thought I’d add some fun lacing! My Heelys came with a great pair of standard, black laces. But, with a crafter’s supply of ribbon, I was able to glam up these shoes… without ever touching my bedazzler (which did cross my mind… for a minute)! 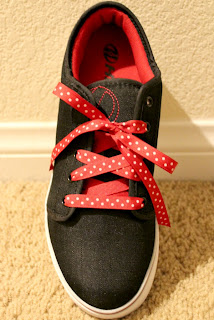 My first thought was this fun polka-dot grosgrain ribbon, which matched the red trim and stitching already on the shoes. Since the shoes I picked out are suitable for both guys and gals, this ribbon gave the shoes a fun, feminine edge. 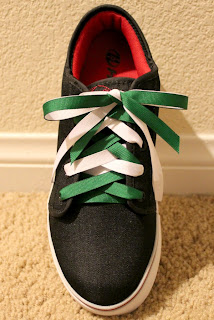 Next, I reached for two colors. My High School Colors were Green & White, with a touch of black. By lacing the colors through alternate holes, these laces scream with Burro pride! Which I still have lots of… after all, I lettered in High School. Um… in Band. Though, more specifically, it was Colorguard. Where my nickname was “grace.” Alluding to my lack thereof… ahem… moving on…
To get this effect, I wove the laces through, always going up through the holes. In the first row I have just green, the second I did both white and green, the third is just white, the fourth just green, and the top has both, before tying a bow. It is easier to just have one color in each row, but putting both colors in row two meant that I got two “stripes” of each color, instead of making one color more dominant. If I had chosen to go with red and white, this would make a fun candy-cane effect for the holidays. 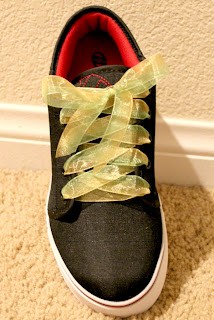 I had some fun organza that I just had to try out. Again, giving the shoes a more feminine vibe, the organza makes the Heelys feel flirty as well as fun…
Here, I kept the lacing simple. I went up through each hole, always doing the left side first, then the right, to keep the “weaving” pattern across the tongue of the shoe even. The organza already has so much shine and texture, I didn’t want to distract from it with an uneven lacing pattern.

I still can’t decide which one of these is my favorite… it will probably depend on what else I’m wearing, so that I can have laces that coordinate!

And with or without the wheels popped in, one thing is certain… I’ll have the coolest kicks in town!

Disclosures:  https://CMP.LY/1/0mdHN3 Laces are an important part of a shoe. Always be sure that the materials you are using will adequately support your foot. You are responsible for your own safety.