As I mentioned yesterday, we went to two BBQs, and had a blast. I volunteered to make desserts. Since we were going to 2 BBQs, I made 3 desserts, and then broke them up into 2 halves… so I brought half of each of 3 desserts to the events. Here is what I made: 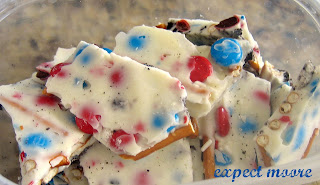 Cookie Bark {Love Stitched}
This was super easy to make. It was about 10 min of “hands on” time, and made 4 containers this size. It was also gobbled up at both parties. The original recipe from Homebased Mom is for a candy-corn bark that I will ABSOLUTELY be making for our pumpkin-carving party this October. I used 2 12oz packages of white chocolate chips instead of candy melts, and it worked fine. 😀 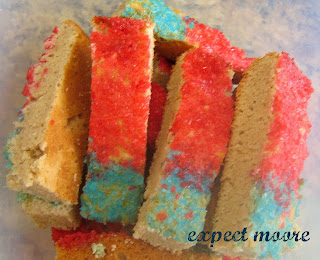 Sugar Sticks {Confessions of a Cookbook Queen}
I didn’t have a large enough pan, so instead of splitting the dough into 2 pans (like I should have), I made thicker sticks. Next time, I’ll split the dough. However, the 6-year-old guest at our neighbor’s house took one bite, and exclaimed “YUM!!” So, I guess they were pretty good. ;D Oh, and I found out (too late) that my sugar sprinkles were flavored – the red are cinnamon, and the blue are blueberry. Not a flavor combo I would have purposely put together! 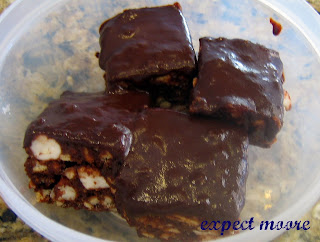 No Bake Brownies {Confessions of a Cookbook Queen}
Another yummy, and simple recipe. I loved that I didn’t have to have the oven on for this one (living in Vegas, I try to avoid the oven in the summertime). These were Little Moore’s favorite, and he would ask “Cok-lit?” whenever he wanted more. His hands (and face) were wiped several times last night to remove the gooey residue!
There you have it! Three very yummy recipes, all of which will find a home in my recipe file!
Expect Moore… soon!