I love having a little boy. I grew up with three brothers. I am not a big fan of the color pink. BUT that doesn’t mean that I don’t ooh and aah over all the adorable little girl clothes and crafts I see out there on the ‘net.

That’s where my beautiful little niece R comes in. I can make her all the cute, ruffled, pink outfits I want (getting them out of my system), so that I can work on Monsters and Trucks (or Monster Trucks) for my Little Moore.

I saw some really cute ruffle-butt onesie tutorials out in blog-land, and really liked Char from {Crap I’ve Made}‘s Tutorial over at U-Create. But… my serger is out of commission (the shop says they’ll work on it for $300.00, but no guarantee that they’ll be able to get it working properly). She has a couple good options for making ruffles without using a serger, but I decided to go a slightly different route… here’s what I did. 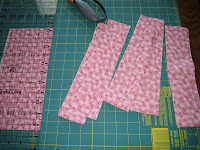 I took a fat quarter of pink fabric (so I could get all of the ruffles and the pink out of my system at the same time).

I cut 5 2.5″ strips. I sewed these strips with a 1/4″ seam allowance, then turned them right side out. I pressed them with the seam down the middle of the strip (not at one edge). 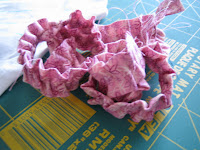 Using the largest stitch setting, I sewed right down the middle (down the seam), and then pulled the thread to gather the strip into a long strip that is ruffled on both sides.

With water-soluble pen, I marked 5 lines on the onesie that were 1″ apart. This, coincidentally, was the width of my strips after being folded and sewn. 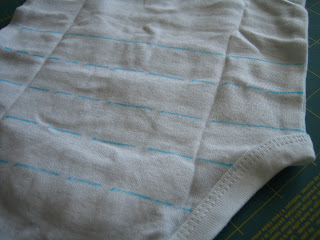 At each end, I left plenty of extra ruffling to sew down on the last step. 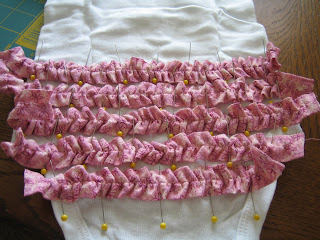 I also made sure, when pinning, that the strip had not twisted while getting ruffled up.

Lastly, I made sure that I was pinning each ruffle strip with the seam side down. I didn’t want to see any of those seams on my finished piece.

I sewed down each ruffle using a small zig-zag stitch. I probably could have used a straight stitch, but I thought the small zig-zag would work better.

About halfway through the ruffles, I was pretty un-impressed. I didn’t think it looked very good, and was ready to toss the project… but I figured I might as well see it through to see what happens. I’m glad I did.

After sewing down the ruffles, I trimmed each end about 1/4″ from the seam on the onesie (either the side seam or the leg-hole seam). I folded this 1/4″ under, and then zig-zag stitched the ends down, making sure not to leave any raw edges. 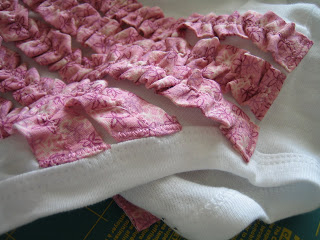 This part is also less than perfect… but… I think it is still pretty cute. And, a pretty simple way to take a onesie from ordinary to extra-special in about an hour or so.

Also, it was a great way to get both the pink and the ruffles out of my system… I’ve got fabric out to work on a couple more pj pants… cars and monkeys and stripes, oh my! 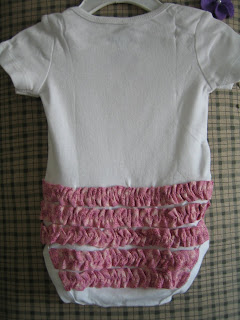 After making such a cute tush, I couldn’t leave the front un-adorned, now could I? So I used my Cricut-Fabric technique to applique an “R” on the front. I’m going to need to get another font cartridge for my Cricut… 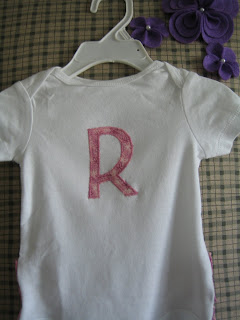